When my husband and I visited Geneva for our apartment search, our relocation agent did not take us directly to available units. Instead, she showed us around town and tried to introduce us to the Genevois way of life, and the first place she took us was the farmers market.

If we hadn’t already made the decision to move to Geneva, the market would have sealed the deal. Row after row of fresh produce, flowers, bread and pastry, fresh cheeses – we were impressed. Now that we’re permanent residents, going to the market has become routine.

Luckily, there are markets around the Geneva area every day of the week:

Most markets open at 6 a.m. and close by 1 p.m., although some stay open later. Each market has its own particular character, be it lots of different prepared food carts, fresh produce along with secondhand books and clothes, or trucks selling rotisserie chickens next to rows of olives, dried fruits, and spices. Many markets have wine tastings, too, which is a great way to discover local wines. 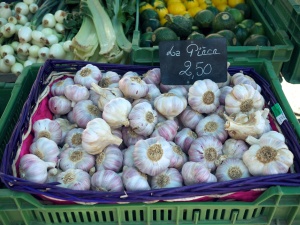 One thing to remember is, as with any farmers’ market in any country, going early is key if you want the best selection. Some stands, especially those with prepared foods, fresh baked breads, and/or fresh cheeses, tend to sell out early. I have a favorite spot for croissants, and it’s always a disappointment to trek down to the market on a Saturday morning only to find the croissants sold out before I got there! Also, in general, weekday markets tend to be less busy and have less selection than weekend markets.

Another tip is that you don’t necessarily have to be fluent in French, although French is always appreciated. Most sellers speak basic English, all are happy to present a written receipt with your total amount due, and in a pinch, pointing and gesturing are universally understood.

One more thing I’ve learned: shopping at farmers’ markets is a good way to get rid of all your spare change. In Switzerland, the lowest denomination paper currency is 10 CHF; anything smaller is in coin form, and over time, those coins can start to weigh down the purse or pocketbook. I keep spare coins in a jar during the week, and bring them all with me when I go to the market.

This weekend, I decided to take advantage of late summer offerings and center our meals on what we could buy at the markets. For Saturday breakfast, I bought croissants and quiche with chèvre and summer vegetables from my favorite cheese truck; for lunch, I made a tomato and mozzarella salad using sun-ripened cherry tomatoes, buffalo mozzarella from the same cheese purveyor, and fresh basil; and for dinner, I put together paninis on bread baked that morning with cheese and vegetables. Sunday, we had rotisserie chicken still warm from the spit and fresh sweet corn, and I made a roasted tomato soup with vine-ripened tomatoes. This is one of my favorite times of the year to cook, and living in Geneva makes it easy because almost everything I need is available fresh and grown locally!

We are a group of international women living in Geneva, Switzerland.  If you would like to join the AIWC, please visit our website at http://www.aiwcgeneva.org/.