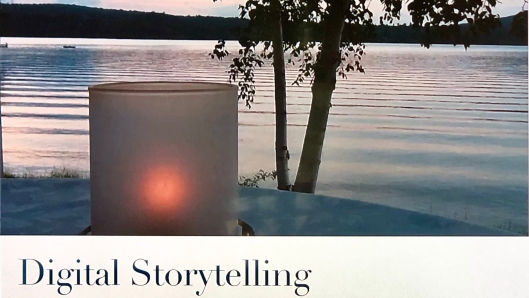 A few years ago I decided to do a graduate program in communications. I am a mother with two grown children (who were also in graduate schools at the time). The decision was based on my need to keep up with the Millennials and the communication tools of today (which can be overwhelming to a person of my age) and because, finally, I had the time. I was (and still am) working as an editor/graphic artist for our Club magazine and wanted to learn a few new skills (and sharpen a few old ones).

During the course of my studies, I found “digital storytelling.” (Well, not so much found it as learned the new term.)

I had actually studied this medium decades ago in a journalism class, although then it was called multi-media, or audio slide show or slide-tape (owing to the fact that the technology involved was the use of Ektachrome™ slides shown on a projector. Audio was played on a tape recorder (reel-to-reel or the newer, more convenient cassette). Moving footage was captured on bulky movie cameras where the footage had to be developed at a lab, and physically edited by cutting the filmstrips (again with the use of special equipment). Screenings were in a single venue where you had to set up the projector (s), and screen, and invite the viewers to that venue.

Suffice it to say, the equipment at every stage was cumbersome, expensive and mostly available to serious content-makers, so only interested and well-outfitted “makers” got to make and tell these multi-media stories. I let it go.

So, you can imagine what happened when the “Smart phone/tablet” showed up! Suddenly I could photograph, film, record voice, music and sound effects, do special effects, edit and showcase a finished project, (the equivalent of a slide-tape or short film) with one small device and a few taps. I’ve been creating my own digital stories ever since.

While the digital story may have always been there, today this type of “story” has grown and evolved. Now that it has become a choice, shareable medium for the masses, most are short (under 5 minutes) and personal—like the narrator is sharing his/her story with you alone—powerful enough to make a point and capture an audience with the use of a few words, photos and accompanying sound. So influential is this format that corporations, non-profits as well as individuals are using these stories to sell products,  and create awareness by evoking strong personal connections because…”I’m telling you what happened.” Suddenly, I learn of a story of courage and determination of an organization far away or listen to the personal challenges of an athlete, just to sell a pair of running shoes.

These past few months I have been sharing my newfound knowledge and skills with interested members of the AIWC. We learn how to capture a personal moment, or create a living document of a special person, object or event. I enjoy telling people that if I can learn it anyone can. You don’t have to be a “techie,” you just need to enjoy telling stories.

One older woman who had created an engaging “one-photo” story of a beloved deceased aunt lamented, “but where or with whom am I going to share this?” My answer: ” Just try to enjoy the crafting process of combining story, with images, voice, music and sound effects, filters, collage, transitions—all woven together to create the mood that you  select. You can watch it over and over, or send it to a family member, a friend, and soon, an audience sprouts and people get back to you with, ‘that was so touching!'”

So even if your audience is one, two or just you, the digital story is creative, fun and within your grasp, if you are already holding your mobile phone.