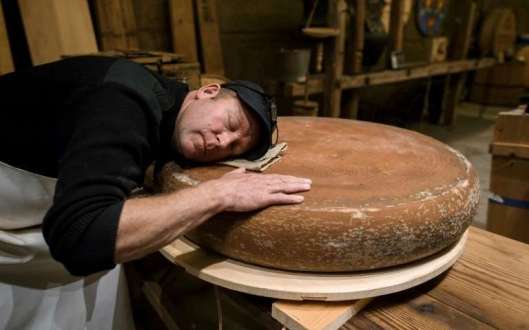 No, the reversal of the words “food of love” from the Shakespearean quote (Twelfth Night) in the title of this post is not a mistake…and now, could even be fact…at least for one food—cheese, or so say the Swiss.

It has long been studied and accepted that music is good for humans, animals, even plants. This prompted a cheese-maker Beat Wampfler and science students from the University of Arts in Bern along with the help of the university’s music department, to test another living organism—bacteria. Since bacteria is used in the cheese-aging process, Wampfler, using the scientific method, decided to age some of his wheels of Emmental to music with the hope that music could influence and improve the taste during the ageing process. In the broader spectrum, this project also seeks to integrate the arts in the local agricultural communities.

The experiment began eight months ago when eight wheels of Emmental were hooked up to different types of music, ranging in style from Mozart, to Led Zeppelin to Hip-Hop.

The results came in yesterday, March 14, and, according to a panel of cheese-tasting experts, Hip-Hop music has produced the best-tasting cheese.

Could we be seeing “Mozart-ian or A Tribe Called Quest-ian Emmentals” or  “Led Zep Appenzellers” in the dairy-case soon? Maybe more experiments need to be done, but it’s an encouraging start.

VIDEO about the study

I do hope that at least some of these famous Swiss cheeses will be listening to “Le Ranz des Vaches (Lyoba).” It’s only fitting, and that might produce the sweetest taste of all…and totally Swiss… Sources: Swissinfo.ch, phys.org

We are a group of international women living in Geneva, Switzerland. If you would like to learn more about our activities and excursions, visit our website at http://www.aiwcgeneva.org/