School’s back in session so the halls of Collège Calvin are once again filled with students ranging from 15 to 20 years old (repeating a school year is a common phenomenon in the tough Swiss school system). Several years ago I wrote a blog about John Calvin’s school while excited about my daughter attending this historical school built by the Calvin himself in 1559; a 420 year age difference with my own high school.

At the time of my blog, five years of renovations were nearly complete. The scaffolding has since come down and the school literally shines. So it’s time for part two of that blog since I have discovered a little more about the school. 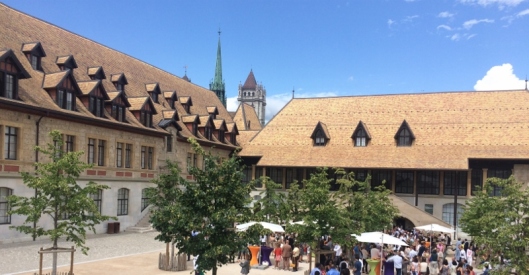 During an Old-Town tour by a long-time AIWC member and certified Geneva tour guide, I learned two more “claims to fame.” In addition to Nobel Peace Prize winner Henry Dunant, the grandson of William Penn (founder of the state of Pennsylvania) was sent to Calvin’s school, then known as the Geneva Academy. Penn’s family sent him here as a way to reject his youthful marriage to the daughter of James Cox of London.

Thirty years later, Benjamin Franklin sent his grandson under the care of Philibert Cramer (publisher of Voltaire) to the newly named University of Geneva. However, he was pulled out when Ben Franklin learned of the poverty that had stricken the school.

During the renovations, the “directrice” of Collège Calvin kept the students apprised of the work being done and the historical significance of the buildings in which they were being educated.  She did such a good job of teaching respect of the property that when the project finished and the trees were not replaced in the school square, the students protested until the planting commenced. Then all hell broke loose when two original windows were broken during a water balloon fight with the neighboring Collège de Candolle.

The students also learned that school was built in such a way as to let the Bisse, our blustery northerly wind, pass through the square in order to stimulate enlightenment.

And lastly, during one presentation the tile roof specialist described how every tile was removed, cleaned and reset on the roof. Somehow the roofers covered more space with the existing tiles and had leftovers. These were placed on the cafeteria building along with a collection of roof tiles from around the country. Now it’s referred to as the “musée des tuiles,” or museum of tiles.

The old town of Geneva is full of small secret roads that today are opened to the public only during the Fête d’Escalade. The Collège Calvin is rumored to also have secret passages that were built by John Calvin. Unfortunately, no such passages were found….so “they” say.

We are a group of international women living in Geneva, Switzerland. If you would like to join the AIWC, please visit our website at http://www.aiwcgeneva.org/

1 thought on “In the Heart of our city, John Calvin’s School”