Me:”Wow. What are these cookies? They’re delicious!” Steph: “ANZAC biscuits.” Me: “Huh?”

I felt like an idiot. Our women’s club has over 45 nationalities so I’ve learned a lot over the years. How did I ever miss one of the most celebrated days and cookies in New Zealand and Australia?

Steph explained to me that ANZAC stands for Australia New Zealand Army Corps and the biscuits are served on Tuesday as part of ANZAC Day honoring those soldiers who fought the Gallipoli Battle from April 25, 1915 to January 9, 1916 during WWI in modern day Turkey. Nowadays ANZAC commemorates all New Zealanders and Australians who have fought and died in wars, conflicts and peacekeeping missions.

The biscuit, legend has it, was meant to travel well over the ocean. That’s because with oats, golden syrup and no eggs, they were already quite hard and wouldn’t spoil. I can’t imagine how happy the soldiers were to receive packages of these biscuits from home. But then I read on wikipedia that ANZAC “tiles,” or “wafers” were used more as a fundraising item and served at galas and parades.

Below I am sharing Steph’s delicious recipe (click on the photos to enlarge). After much discussion amongst the women at the Club, one can purchase Golden Syrup in the foreign foods section of big Coops or in France (though I plan to try using Migros’ caramel) and brown sugar (sucre canne, la perruche, sucre pure canne) can be found at Aligro or in France. 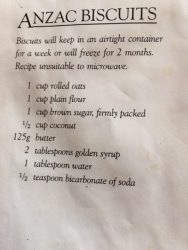 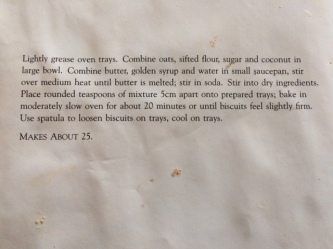 ANZAC Day is a day of remembrance. April 25, the day the soldiers landed in Gallipoli is a national holiday. The day begins (as outlined here) with a Dawn Service, marches and parades. Here in Switzerland, the local Australian and New Zealand Missions are hosting a commemorative morning service  at the Commonwealth War Graves Cemetery in Vevey this Tuesday, April 25 at 11:00. All are welcome.

We are a group of international women living in Geneva, Switzerland. If you would like to join the AIWC, please visit our website at:http://www.aiwcgeneva.org/