Wondering why the shops are displaying elaborate chocolate cauldrons and marzipan vegetables? Have you also noticed the grocery stores selling costumes, chocolate coins and wrapped candies with tiny fire crackers inside? It’s all for Geneva’s Escalade. 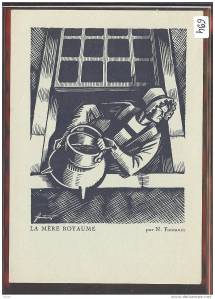 On the darkest December night in 1602, the Duke of Savoy attacked Geneva when we were least expecting it. Legend has it that Mère Royaume was up late in the night nursing her sick husband. She heard a sound below her window and when she peered outside she saw a man sneaking up a ladder beneath her. She grabbed her cauldron of soup and dumped it over his head.

The noise raised the alarm causing men to jump out of their beds, still in their night clothes, to fight the battle. One hero, Isaac Mercier, armed with just a knife jumped down and cut the rope of the metal gate at Port Neuve. The gate slammed shut before the Savoyard explosion expert Picot could blow up the wooden door  which would have made possible the invasion of 2,000 soldiers stationed nearby at Plainpalais.

These are the stories children are taught which give us today’s traditions. On Friday and Saturday (December 9/10) kids throughout Geneva will dress up in costumes and sing. If they perform for you in the street or a restaurants, go ahead and give them a couple of francs. It’s tradition! If they ring your doorbell, ask them to sing then give them a treat. When my neighbors were children they received small coins. This has since been replaced by chocolate coins you can buy at the supermarket.

This video of children in a restaurant is not great quality but it gives you a feel for the song and ambiance!

At the elementary schools the kids prepare a giant vegetable soup which is often shared with the parents in the playground. There is singing and then everyone gathers around a giant chocolate cauldron (called a marmite) filled with marzipan vegetables and candies wrapped in Geneva’s colors. The oldest and youngest in the group grasp hands, shout  Ainsi périrent les ennemis de la République!  (thus perish the enemies of the Republic), then slam their hands down breaking the chocolate into pieces to share with everyone. 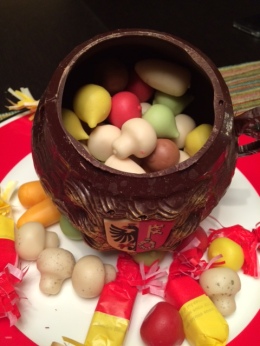 Be aware that Friday can get a bit wild around the city. All the fourth year high school students organize a fun filled day which includes parades and a mess of flour, eggs and shaving cream.

If you’re interested in the historical Escalade activities over the weekend  which include guns, cannons, parades and marching bands; check out Courtney’s blog from last year here or this YouTube video here.

We are a group of international women living in Geneva, Switzerland.  If you would like to join the AIWC, please visit our website at  http://www.aiwcgeneva.org/

2 thoughts on “Chocolate Cauldrons and Costumes”