August 1st marks Swiss National Day; the day a pact was formed between representatives of Uri, Schwyz and Nidwalden. Little did these men know that their alliance to defend against the Habsburgs would be the birth of a nation whereby the cantons still stand together 723 years later.

Much of early Swiss history is legend. This story goes that on August 1, 1291 representatives of the three republics met in secret at a meadow slightly up the hill from Lake Uri.  They signed the Rutli Oath and declared, “We want to be a band of brothers, sticking together through thick and thin!” 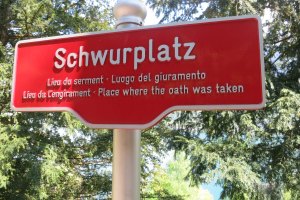 I recently packed my backpack and embarked on the Swiss Path with my family. This 35 kilometer hiking trail along the southern banks of Lake Luzern (also known as Lake Uri, or the Four Cantons Lake) was built to mark the 700th anniversary of Switzerland. The highlights include:

Hiking the Trail : My recommendations

My husband and I had big plans for this hike. Unfortunately one of our teenagers didn’t so we saw much less than we had hoped. Having said that what we did see was absolutely gorgeous.

Bellow I have listed what we did and a few alternatives that looked good. But first download the English brochure “The Swiss Path” from the Luzerne webpage so it all makes sense. For topo maps (which are not necessary) you can click here from the Wanderland webpage. The Swiss Path is trail #99.

Hiking down to Bauen.

Our hotel in Bauen. 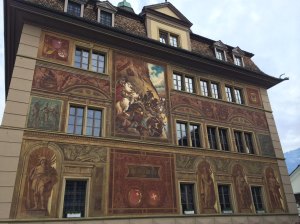 As much as I had wanted to hike the entire 35 kilometer trail, I am happily satisfied with our trip of three days and two nights. We briefly walked around Luzern before catching our train home. Cortney, a regular blogger for Living in Geneva, recently spent a long weekend there. Click here to read about her highlights of the city. 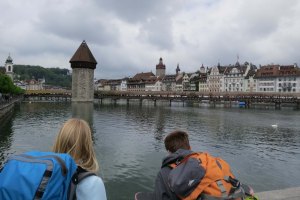 We are a group of international women living in Geneva, Switzerland.  If you would like to join the AIWC, please visit our website at  http://www.aiwcgeneva.org/