The weekend of Ascension 2014 kicked off Geneva’s bicentennial celebrations (a.k.a. GE200). I say “kicked off” because Geneva actually became a member of the Swiss Confederation May 19, 1815. Notice the year?

One might think that we are celebrating a year too soon but actually 200 years ago on June 1, 1814 at 7:00 am, approximately 300 Confederate troops from Fribourg and Solothurn landed at the Port Noir. They disembarked their boats yelling “Vive Genève. Vive la République. Vive le nouveau canton!” This symbolic gesture demonstrated that in the minds of the Swiss, Geneva was already part of Switzerland. 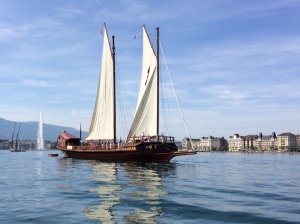 The first round of GE200 celebrations is finished. The weather was fantastic, people enjoyed the food and music and I particularly enjoyed seeing the old boats from around Lac Leman converge in Geneva. What you may not realize is that more events will continue throughout 2014 until September 2015. The entire program can be found on GE200’s webpage. Below I have highlighted some of the activities I think look interesting. 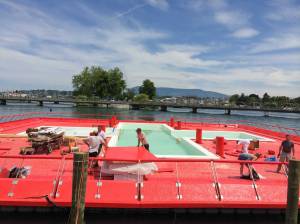 The French word amarrage means mooring. The city has created floating baths in the shape of the Swiss flag on the river Rhone.  At a temperature of 24C (neither hot nor cold) this will be either really neat or a nasty germ bath. Time will tell.

A 7 km historical loop has been set up that begins and ends at Port Noir. The 10 posts around the city explain the historical significance of each area and show pictures of the exercises you should do there. The loop includes Bourg de Four, Place Neuf, Plainpalais and Cimetière des Rois.

This bicycle tour will be led by a historian and five musicians following the path those Confederate troops took that I mentioned above. The history (in French) and music will be related to Switerland; such as how Rossini was inspired by the history of the Swiss Confederacy and the implications of Beethoven in the borders of Switzerland.

I have already missed the first tour which was June 8. But the next are August 30 and 31; and September 20, 21 and 27. You must inscribe on line www.samedisduvelo.ch The cost is free but bring your own bike.

The Swiss Confederacy was busy expanding in 1814 and 1815. Neuchâtel joined in September 1814, Geneva May 1815 and Valais August 1815. This year, on September 10, during the autumn session of the Federal Chamber, the three cantons will celebrate together their bicentennial entry into the Switzerland. The public is invited to the festivities that will be held near the Federal Palace in Bern. 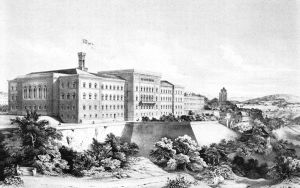 I urge you to look at the GE200 website where you will find more activities such as shooting competitions, plays (Rien de Tell), a wine competition, storytelling, historical tram rides and more.

We are a group of international women living in Geneva, Switzerland.  If you would like to join the AIWC, please visit our website at http://www.aiwcgeneva.org/