Looking for an easy day trip from Geneva? One of my favorite destinations is Meiringen, Switzerland. Meiringen is just 3.5 hours away from Geneva by train or 2.5 hours by car, and the town is small enough that you can see several different attractions in a day.

The most recognizable of Meiringen’s attractions, the Reichenbach Falls became world-famous when Sir Arthur Conan Doyle, a frequent visitor to Meiringen, chose the site for the climactic scene in his Sherlock Holmes book The Final Problem. In the original tale, Holmes and his arch nemesis Professor Moriarty fought on a ledge at the falls, a tussle which led to both of them falling to their deaths (under pressure to bring back his popular character, Arthur Conan Doyle revisited The Final Problem and crafted a plausible escape from the Reichenbach Falls, details of which appeared in a later story).

A walk through Meiringen to the falls builds anticipation for any fan. The Sherlock Holmes museum, located in the basement of the Anglican Church near the train station, has a life-size statue of the detective outside – deerstalker and all. Other sights in town include “221B Baker Street” and Conan Doyle Place. 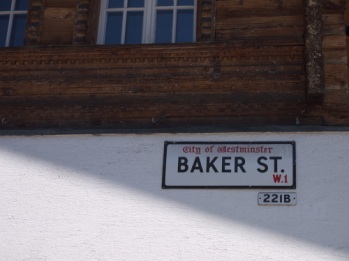 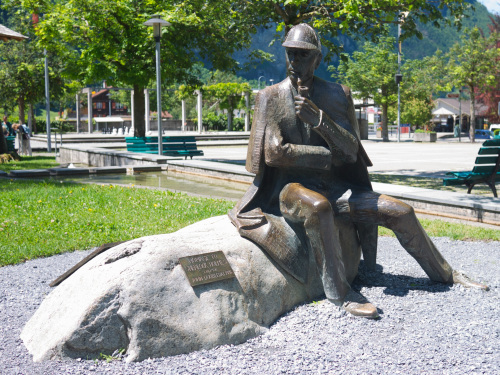 Even if you’re not a Sherlock Holmes fan, the falls are impressive in person. The falls are visible from the center of Meiringen, and as you draw near, the roar of the water is audible even from the valley floor. 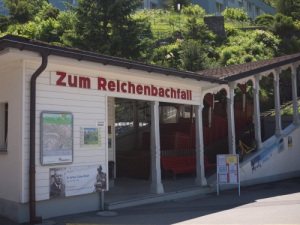 Set just outside of Meiringen near Willigen, the Reichenbachfall-Bahn funicular train carries visitors from the valley to the lower part of the falls. At the funicular station, there’s a viewing platform; from there, a short hike brings you to the very top of the falls.

If you want to see the exact ledge where Sherlock Holmes and Professor Moriarty fell to their fictitious deaths, you will need to hike down the other side of the falls and watch for the marked path. You can also see the ledge from the funicular’s viewing platform; it is marked by a star painted on the cliff wall.

There’s also a cut-out of Sherlock Holmes placed at the lower viewing platform, ready for you to step into for a photo. Give it a try!

Before it became famous for its mention in Sir Arthur Conan Doyle’s tale, Meiringen was known for being the birthplace of meringues, a dessert made from sugar and egg whites. It is said that in 18th century Meiringen, an Italian named Gasparini invented the meringue when he had too many leftover egg whites and wanted to create some new treat to impress Napoleon, although that legend has been disputed. According to Wikipedia, the Oxford English Dictionary lists “meringue” as a word of unknown geographical origin.

What can be verified is that Meiringen set a world record for making the largest meringue back in 1985. The recipe: 2500 eggs and 265 pounds of sugar. If you’re in Meiringen, be sure to try a meringue or two! Meringues are sold at pastry shops, the Meiringen train station, and the Aareschlucht gift shop (see below).

For anyone visiting Meiringen, the Aare gorge (known locally as the Aareschlucht) is not to be missed. This year is the 125th anniversary of its opening to the public.

The gorge was carved more than 10,000 years ago; glacial runoff cut through limestone to shape what is now a deep and narrow gorge. The sheer scale of the gorge is impressive. Walls rise 50 meters (about 165 feet) high, and in the narrowest parts, noise from the flowing water is loud enough to drown out any other sounds.

A path through the gorge has been open since 1888. Today’s route relies on both tunnels and wooden walkways anchored into the gorge’s walls.

You can read more about the Aare gorge here. 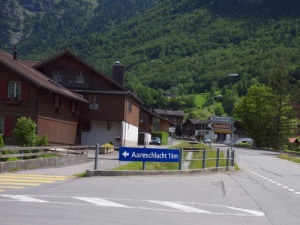 The gorge has two entrances, one from the direction Meiringen and one from Innertkirchen. Parking is available at both entrances of the gorge and is free for buses and private cars. If you’re coming to Meiringen by train, you can also catch a direct ride to either entrance on the Meiringen-Innertkirchen-Bahn (MIB) from the main Meiringen train station.

The Reichenbachfallbahn: The falls are only open part of the year, May through October. This year the falls open 4 May and close 13 October. Guide books recommend seeing the falls in the springtime, when the torrent of snowmelt from the nearby mountains makes the falls their most dramatic. In the months of May, June, September, and October, the funicular operates from 9:00 until 11:45 and 13:15 until 17:45. July and August, the funicular runs from 9:00 until 18:00. Be advised that tickets are first-come, first-serve and the funicular is popular particularly in July and August. An adult return ticket costs CHF 10 and a one-way ticket is CHF 7. For children ages 6-16, a return ticket costs CHF 8 and a one-way ticket costs CHF 6.

The Aareschlucht: The gorge is closed during winter, but the West entrance is now open to visitors through to early November. The East entrance (from Innertkirchen) opens on May 18th. The path is wheelchair accessible from the West entrance to the middle of the gorge. Opening times are 08:30-17:30. June 12th through September 15th, Wednesday – Sunday, the gorge is illuminated by multi-colored spotlights between 17:30 and 22:00 (from 17:30, only the west entrance is open). Admission costs CHF 7.50 for adults and CHF 4 for children aged 7-16. Children 6 and under are admitted for free. Discounts are also available for students, members of the military, and groups; click here for the reduced prices. For 2013, in celebration of the gorge’s 125th anniversary, admission to the gorge includes a ride on the Meiringen-Innertkirchen-Bahn (MIB). One more thing: If you visit – especially if you visit during snowmelt season – be sure to bring a rain coat! The water is inescapable and very cold.

Combined tickets: If you’re planning to ride the funicular, walk the gorge, and/or tour the Sherlock Holmes museum in Meiringen on the same day, combined tickets are sold at the Reichenbachfallbahn funicular station and the Aare Gorge ticket office. Here are the published prices for combined tickets: 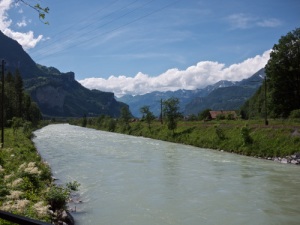 View of the Aare river west of the gorge

We are a group of international women living in Geneva, Switzerland. If you would like to join the AIWC, please visit our website athttp://www.aiwcgeneva.org/

2 thoughts on “Day trip from Geneva: Meiringen and the Reichenbach Falls”